U16 Boys Impress at MAC 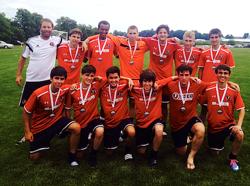 The SJEB U16 Boys played some of the best attacking soccer of the season so far at the Mid Atlantic Cup hosted by PA Classics. As usual with this team, they made it difficult for themselves in a roller coaster start to the first game. Leading 3-1 against FC Revolution they hit the self-destruct button in the last 10 minutes allowing Two goals, the second of which was in the last minute. Highlight of the game was Geoff Scheafer's 30 yard screamer that went in off the cross bar.

Adopting a 4-4-2 formation in the group stage they created havoc with Grossman and Scheaffer up top running at defenders and combining well. The second game against Clifton Stallions ended 4-0 to SJEB giving them Four points going into day two. Highlight of the Clifton game was another Scheafer special bent into the top right corner from 20 yards out.

SJEB required a win in the final group game against Empire (NY), followed by a huge scoreline to ensure they topped the group on goal difference. They did not dissapoint, Grossman put them in the lead with a rocket from 25 yards into the far right corner. Faulsiet tapped in a rebound for the second, Wenzel burried a penalty then Pierce Adams, widely know in South Jersey for having only one leg, scored a stunning weak foot half volley from 18 yards out that blazed a trail into the top right corner.

SJEB topped the group with two wins and a draw, going through with a superior goal difference of +7, job done.

Awaiting the lads were Montgomery Utd who are ranked #3 in Maryland and who hammered us at the Bethesda Thanksgiving Showcase 5-1 largely due to their excellent striker Joshua Fawole who is goal scoring pheanom.

Starting of at a snails pace SJEB were behing early, Fawole scoring from a narrow angle at the back post from a deep cross.

To make things worse they were awarded a penalty when a cross was driven into an SJEB hand. Fawole stepped up and burried the PK making it 5 goals in Two games against us.

Needless to say Coach Thompson had a few stern words and reminded the players of their brilliant attacking play in the first three games and how they need to produce such energy and vigor against the top teams in the nation.

A tactical change going to 3 defenders, pushing an extra player into midfield to shut down their dangerous playmaker Mathew McCann who had dictaded the game in the first half, made an immediate effect.

SJEB started to apply pressure on the Montgomery keeper, Wenzel went close with a header, LaMorte had a side volley tipped around the post by a fully stretched keeper. A Scheaffer free kick skimmed the bar and Stewart had a shot just trickle wide of the post.

Finally the Barons pressure payed off when the impressive Scheaffer found space on the edge of the box and fed through Cristian Dascenzo who made a run inside the left full back, he took the ball in stride breaking through the Montgomery back four and tucked it away in the top right corner.

Another flurry of attacks and pressure did not result in any more goals but the turn around in attitude at half time was a victory in itslef and the lads can be proud of the way they took the game to teams.

Should they play like this for the remainder of the season they will cause teams lots of problems.

Next up is the Central Jersey Invitaional followed by the MSSL Summer Showcase at Tuckahoe Turf Farm.