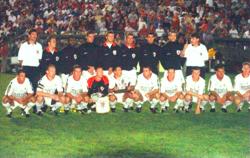 After a Four year hiatus we are very pleased to announce the return of our Mens' Team giving us a holistic development program from 'cradle to grave' on the Boys' side.

The club started with as a professional Mens' team in 1997 playing in the USL Division 2 League, in 2003 the club turned amature stepping down to the USL Premier Development League, having great success, qualifying for the US Open Cup on several occasions.

In 2009 the Youth Club and Mens' Team parted company and this left the Youth Club with out a Men's team to call our own. Over the last few months Techincal Director John Thompson discussed the project with former SJEB Alumi Joe Banks and Joel Sanger who both have the desire to and passion to re-establish our Mens' team. Thanks to their hard work over recent months we are pleased to announce that we will field our team in the United Soccer League (PA). Click here for the Wikipedia entry on the USL.

Joel joined the Barons in 1998 as an Eleven year old, his 87/88 team was coached by current SJEB staff coach Dan Christian. Joel spent 10 years with the club with his team making State Cup Semi-Finals and winning the Jefferson Cup. "I was a proud 'Baron' for 10 years as a junior and grew up in the club, with Coach Dan, Coach Neil, Coach Scott and Coach John. It will give me great pride to put on a Barons' Jersey and play for the club again. When Tomo called me to get involved with the Mens' team I didn't hesitate to say yes, its a fantastic club with great history in South Jersey, regionally and nationally. Myself and Banksy want to put together a team capable of winning the league and challenging for the cups."

The team will also enter the New Jersey Mens' Open Cup, with the ultimate goal is to qualify for the US Soccer Open Cup where amature and professional teams compete for the oldest cup competition in the country the Lamar Hunt Cup.

In addition to Joe Banks (85/86) and Joel Sanger (87/88) who will lead the team we have already secured the siginings of six former SJEB Alumni.

Other stand out South Jersey locals have committed to the club.

We are very honored to be allowed entry into the United Soccer League (Est. 1959) which consists of some of the oldest clubs in the Tri-State region and the weekly comptetion will be tough. 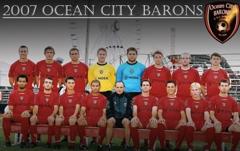