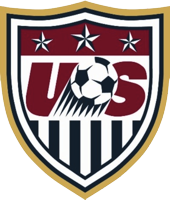 SJEB U16 Goalkeeper Alexa Gardner had the honor of representing her country on the US Youth Futsal U16 National Team that recently traveled to Costa Rica. Alex was selected from regional tryouts in Boston and was invited to a 5 day national tryout in Kansas City.

Alexa was impressed with the standard of players involved in the tryout process "I got to meet people from all over the country and I learned so much during the tryouts. I also learned different ways the keeper can get involved offensively and I almost scored some goals while at the tryouts. The level of play, in all honesty is very different form club Futsal, Everyone is always pushing and pushing. I for one love the overall competitiveness that everyone brought to the court. Im thrilled to be playing at this level with some of the best players in the country."

Alexa saw action in every game during the Costa Rica trip and it will be a trip she will never forget "Wearing the US Jersey, wow, not many people can actually wear one and play in it. People buy the jersey and support our national teams but to actually say you will be representing your country, thats pretty awesome."

"The Costa Rica trip exceeded my expectations on all levels," said U.S. Youth Futsal Technical Director Keith Tozer. "Most importantly, the way our teams played was not only exciting futsal but organized futsal."

The Americans competed at the U14, U16 and U18 levels against teams from Alajuela Futsal, Escazu Futsal, Colegio Santa Ana, Santo Domingo and CTP Lindora. A late addition was a match between the U.S. Youth Futsal U18 girls and the Costa Rican Women's National Futsal Team, a closely contested match won by the hosts 4-1.

"At various times on this trip," noted John Leisman, captain of the boys U18 team, "each individual was forced to adapt and learn on the fly. It was this ability to accept a new role or face a new challenge with total commitment that allowed our teams to have so much success."

Director of Goalkeeping Mark Litton was unsure what to expect before the trip but grew impressed quite quickly.

"Our results surpassed my expectations," Litton said. "We thoroughly dominated our opponents in just about every game we played. The trip was an absolute success and will only help to continue our growth as a new futsal nation."

Players were selected through a year-long identification process. Captains were chosen by Tozer and the coaching staff: Leisman (U18 boys), Tziarra King (U18 girls), Alec Bakkeby (U16 boys), Mikayla Kappes (U16 girls), Takumi Ikeda (U14 boys) and Felicia Knox (U14 girls).

"The trip was not only successful on the court but highly successful as far as life experiences," Tozer said. "The camaraderie among the players, parents and coaching staff I will remember for a lifetime."