The partnership allows LKS to serving as a feeder system to the SJEB Soccer Academy and SJEB will refer all players 3-8 to the Little Kicks Soccer program. SJEB will run a training session in conjunction with Little Kicks at their locations whereby players can be introduced to SJEB training and be identified for SJEB Development Team and Full time teams.

Little Kicks Soccer is a mobile soccer program designed specifically for children ages 18 months to 8 years old. Their use of fun and silly games naturally incorporates exercise to increase the physical activity of each child as they begin to explore their own capabilities. All classes focus on developing motor skills, encouraging team spirit, and instilling self-confidence in a non-competitive atmosphere.

Little Kicks Soccer has been the recipient of Four consecutive Courier Post "Best of South Jersey" awards and has been featured on CBS with Pat Ciarrochi. They offer 45 minute classes ranging from parent participation classes for kids 18-36 months old. They also offer classes for 3 yr olds, 4-5 year olds and 6-8 year olds. SJEB coaches will assist players in the Little Kicks U7-U8 program and offer those who show potential to play at the travel level, an avenue to do so through the SJEB Development Teams.

SJEB's Development Team program is based on a training and small sided games model, there's no roster restriction and players are trained in a player pool and play 4v4 soccer on weekends.

SJEB is South Jerseys premier Academy club with a holistic progression for players and currently consists of 450 players in the U8-U14 age groups, and 23 teams in the SJEB Rush HS Program. They have a U23 Mens and women's team and a Men's Team. SJEB have placed over 600 players into college soccer programs since its inception back in 1997. 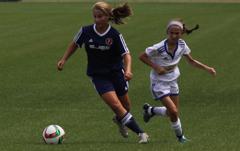 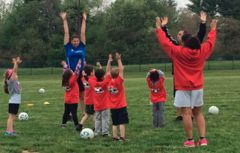