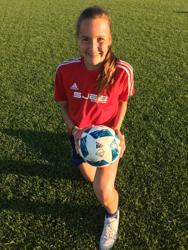 We are very proud to announce that Faith Slimmer has received a call up to the U14 Girls USYNT Training Camp in Colorado. Faith joined SJEB when as a Seven year old and is now with our SJEB Rush 2002 Girls team. Faith is the Third female SJEB player in the past three years to get an invite, Kylie Daigle & Emily Grey being the other two, they are joined by Michael Pellegrino on the boys side. We wish Faith, Kylie, Emily and Michael the very best of luck and wish you continued success on your mission to represent your country.

CHICAGO (July 1, 2016) -- U.S. Under-14 Girls’ National Team head coach April Kater has called up 36 players for the second training camp of the year for this age group. The camp will run from July 9-16 in Ft. Collins, Colorado.

The majority of the players on the roster were born in 2002, with eight born in 2003 and one in 2004. The U.S U-14 GNT did not have programming last year as players born in odd years start with two years in the U-15 Girls’ National Team program.