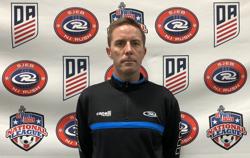 John is a native of Penrith, England, he joined the Barons in May 2002 and has been heavily involved in the communtiy since his arrival in New Jersey. He joined the Barons after graduating from Lewis University (IL) where he received a Bachelor of Science in Management Information Systems.

John began his senior playing career with his local semi-professional team, Penrith, at the age of 16. He moved on to play for Queen of the South and Gretna before returning to Penrith.

Coaching Career
John began coaching at the Age of 16 for Penrith FC, he gained his FA Prelim badge at the age of 17 from Newcastle United, straight away he started the First Touch Soccer Coaching company and owned the Coerver Coaching franchise for Cumbria.

John has been coaching in South Jersey since 2002 with the South Jersey Elite Barons and he was the assistant coach of the Ocean City Barons PDL team in 2006 & 2007 and in 2017 he took the Head Coaching position for the Ocean City Nor'Easters PDL team and took them to a 12-4-1 record in his first season.  Professional outfit Harrisburg City Islanders (now Penn FC) to penalties, loosing 6-5 in the US Open Cup first round. In the 2018 US Open Cup Thompsons Nor'Easter side beat USL Championship team Charlotte Independance 3-1 in a 2nd round upset before losing to North Carolina FC 4-0 in the 3rd round.

Recently two 2002 girls, Kylie Daigle & Faith Slimmer both of whom he coached from U7-U13 called up to the USYNT U14 and U15 National Teams. In the 2002 and 2003 girls age group Twelve of his players attended the New Jersey National Training Center.

John has been implemented many innovative programs with SJEB, such as Summer Select, Development Team, First Touch, Skills Classes and Junior Academy and in each case was the first club in South Jersey to do so.

John has coached the following SJEB teams into the NJ Top 5 rankings.

College Playing Career
In 1998, John accepted a full soccer scholarship from Lewis University Head Coach Evan Fiffles. John had a stellar college career, playing in every game over his four years with the school. He ended his career with the ’Flyers’ as the school’s all-time leader in minutes played.

He is one of only 40 players in the history of NCAA DI, DII & DIII college soccer to garner Three 1st Team-All American honors.

2007
John’s outstanding contribution to the Lewis soccer program was honored by the University when he was inducted into the Lewis University Athletics Hall of Fame.

PDL & Professional Playing Career
In 2002, he joined the South Jersey Barons in what was to be their last season in the professional ranks. He played in over 80 games during his five years with the club. In 2020 he was named to the Ocean City Nor'Easters all time starting 11.
2004
All-Conference First Team.
All-PDL First Team with the likes of Brad Guzan, Eric Vasques, & David Bulow.
PDL Defender of the Year.
2005
All-Conference First Team.
All-PDL First Team.

John spent five years as a Super Y-League Mid-Atlantic Regional ODP staff member. Assists with the EDP Pathway to college program, the EDP PDP Program and the EDP College Camp. He holds a USSF license and the F.A. Preliminary Badge.