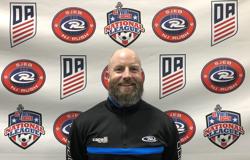 Coach Mullin grew up in North Jersey where he attended Butler High School.  As a high school junior and senior he captained the team and was named to All-Conference, All-County, and All-State teams.  He played his club soccer for the Jersey Hills Wanderers.

In 1994 he continued his education and playing career for Rowan University.  Between 1994-1997 Mullin was a three year starter and senior captain for Rowan teams that earned four straight NCAA berths and compiled a record of 63-14-5 including the school’s first undefeated regular season.  He completed his undergraduate education with a degree in Health and Physical Education and currently teaches H & PE in Cherry Hill.

Between 1999-2003 Mullin served as an assistant coach for Rowan and was part of a staff that compiled a record of 95-19-4 and participated in the NCAA Division III final in 2000.  During this time period he continued his playing career and captured the SJ Open Cup championship on two occasions while also obtaining his USSF “D” license.

He holds a Masters Degree in Higher Education Administration.  Neil lives with his wife Kelly and two young sons in Woolwich, NJ.