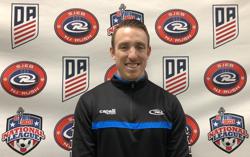 Ian Simmons spent four years playing for the South Jersey Barons Youth Academy. Ian was a part of the first South Jersey Barons youth team when his team formed under the Barons banner in 1999. During his career as a Baron, Ian’s team competed at the top level of youth competition and Ian was able to compete with players who have moved on to play in the English Premier League, Major League Soccer and the US Men’s National Soccer team. Some of Ian’s individual accomplishments as a Baron include time as a NJ youth state ODP player and an offensive team MVP.

Ian played one season at Div. 1 Rider Universtiy before moving on to play two seasons at Rutgers-University Camden and helping the program to become an established power in Div. 3 NCAA soccer. Ian graduated from Rutgers University Camden in 2007 with a B.A. in English and a certification in education. He currently holds a USSF National "D" Coaching License as well as an NSCAA Coaching License. Ian is currently a Language Arts teacher at Williamstown High School and is also the assistant coach of the Williamstown High School soccer team.